The South is known for delicious food. In this down-home cookbook, you will find plenty of Southern recipes along with Seagraves and Pettyjohn family history. Annie D’s Pettyjohn family moved from the North Georgia mountains to Athens, Georgia in 1933, eventually settling in a house in what is today the Boulevard Historic District. Her husband, Nelson “Petie” Seagraves’ grandfather and other family members moved to the Eastside of Athens from Madison County, Georgia in the 1860s. Chapters include profiles, Seagraves barbecue sauce, hash and chicken mull recipes, the history of Madison County, Georgia’s Seagraves Mill, and much more. Dig in and enjoy this combo dish of food and family served Southern-style.

Her full name was Exa Annie Derrell Pettyjohn Seagraves. But we just called her Annie D, Anne, mother, grandmother, sister, aunt, cousin, mother-in-law or friend. She talked in a twangy mountain accent acquired while growing up in the North Georgia towns of Lafayette and Dalton.

In 1933, after moving as a teenager to Athens, Georgia, along with her parents, William “Will” and Ethel Strickland Pettyjohn, and four of her six siblings, Willie Belle, Vic, Luke, and Mary, Anne found another town to love.

Anne also loved fishing in area lakes and cooking in her cozy Eastside Athens, Georgia kitchen in the house on Georgia Drive, near the University of Georgia’s Sanford Stadium.

Lucky for us, before Anne gradually lost her memory to Alzheimer’s, she wrote down some of her favorite recipes, photocopied them and put them in binders for her children and grandchildren. This book contains many of those cherished recipes, along with others found tucked into her favorite cookbooks.

Also included are recipes from Anne’s family members, neighbors and others, plus several recipes from another Ann Seagraves of the Madison County branch of the Seagraves family.

Some of our favorite foods, such as Anne’s fried chicken and sweet potato pie, are missing from this book. She made those Southern favorites throughout her adult life without using recipes. She probably thought we would know how to make them, too. Most of us sorta do, though our versions will never be the same as Anne’s.

The recipes in this book are seasoned with Seagraves and Pettyjohn family history, plus memories and family photos. You will read about how our Seagraves ancestors moved from North Carolina to Madison County, Georgia early in the county’s history and then how some Seagraves, including fraternal twins Hardy and Andy, left the farm and moved to the town of Athens in the 1860s.

Hardy’s son Harvey Lee “Bob” Seagraves represented the City of Athens First Ward as a councilmember for 25 years. His older brother Charles E. “Hard Charlie” Seagraves was a well-known Athens police chief. Another brother, Fred “Shack” Seagraves, worked as a police captain and chief of detectives. You’ll read about them and their other siblings, including Edward Pope “Fid” Seagraves, who became one of the most successful farmers and business owners in Clarke County.

Several restaurants were founded and operated by Seagraves descendants, including Mark Ed Hansford and Susan DeRose. You’ll read about these and you’ll learn about the history of Madison County’s historic Seagraves Mill, a once thriving business that was purchased and operated by Josiah Milsey Seagraves in the early 1900s.

Anne Seagraves’ maiden name was Pettyjohn. In these pages, you will find a well-researched and lovingly written family history article by Anne’s late brother and sister-in-law, Luke and Mabel Pettyjohn. In Luke and Mabel’s article, you’ll meet Pettyjohn and related family ancestors, including those who once lived at Pigeon Mountain in North Georgia, near Lafayette, Georgia. This land today is part of a 20,657-acre state-owned Wildlife Management Area in Northwest Georgia that features abundant wildlife, miles of trails, unique natural features and gorgeous mountain views.

You’ll read about Jacob Pettyjohn and his wife Sarah Bankston Pettyjohn, who long ago posed for a traveling artist. Their charcoal portrait today hangs in a descendant’s dining room, near Ethel Pettyjohn’s beloved art déco Hoosier kitchen cabinet from her kitchen in the Pettyjohn house on Boulevard in downtown Athens, Georgia. You’ll also read profiles of Will and Ethel Pettyjohn’s seven children.

We wish we had more Annie D recipes and more Seagraves and Pettyjohn family history to share. At the same time, we’re thankful to have the recipes Anne and others left for us and the family history, photos and other information we have shared in these pages. Our memories of Annie D’s Georgia Drive kitchen and her love are delicious, too, and continue to nourish and feed us all.—Donny Bailey Seagraves, Annie D’s daughter-in-law and a Seagraves family member since 1970. 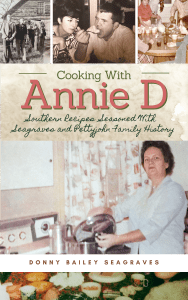 Visit the FAQ about Cooking With Annie D page to find out more about this book.