The bats were a symbol of his greatest gift — his love.

There was already a touch of fall in the air on that late summer day when Grandfather grinned and whispered in my ear, “Are you too old for one of my bats?”

At 23, I did feel too old as I watched Grandfather retrieve a baseball bat from its hiding place behind the door. Closing my fingers around the cool, yellow wood, I accepted Grandfather’s gift with mumbled thanks.

It was the last bat he ever gave me, the final link in the chain of a grandfather-granddaughter tradition that stretched back to

my early childhood. As a lifelong employee of hanna Batrite Company, one of only three bat-manufacturing firms in the world, my grandfather was allowed several complimentary bats each year. He always passed those fits on to the people he loved.

I don’t remember the first bat Grandfather gave me, but every summer the bats got bigger and taller, just as I did. Some years, I got a long, slim baseball bat; other years, a wide softball bat. Sometimes the wood was polished to a fine, mellow glow. Other times, my bat was finished with a dull brown or black stain. But my grandfather’s bats all had one thing in common every year: They all wore the Hanna Batrite trademark, embossed deeply into their wood.

That Hanna Batrite trademark was embossed deeply into my grandfather as well. He worked at Hanna’s for over 50 years, doing the same job, day in and day out. Shuffling through endless wood shavings and breathing in air laced with pungent vapors of varnish and shellac, Grandfather took great pride in making sure that the intricate bat-making machinery never stopped producing Hanna Batrite bats.

“Hanna bats are the best in the world,” he used to say. “Many famous hands have gripped Hanna Batrite handles and smacked home runs over fences. Many games have been won and lost with Hanna’s bats, in crowded baseball stadiums and in children’s backyards.”

In the dusty backyard of my childhood, I would line up my vast collection of Hanna bats across the parched summer grass. Glancing from tallest to smallest, I would select a weapon. Then, facing the woods, I would toss a ball high in the air and knock it clear across the pine trees, into the sky. I never played on a professional baseball team, but I did hit plenty of imaginary homers with my grandfather’s bats.

I left most of my grandfather’s bats behind in my parents’ basement when I grew up and moved away to take my rightful place in the serious world of adults. My musty collection of nicked and dented baseball and softball bats seemed a bit heavy to lug through the many games that grownups play.

But n ow that I’m older and my grandfather and Hanna’s are gone, I know the true value of Grandfather’s bats. I know that my grandfather made bats so that others could make home runs. He couldn’t give me wealth or an easy life. His name was not embossed in those previous wooden offerings he placed in my hands every summer of my childhood. But his love was always there. How could I ever be too old for that?

This article appeared in the September 1992 issue of Mature Living. 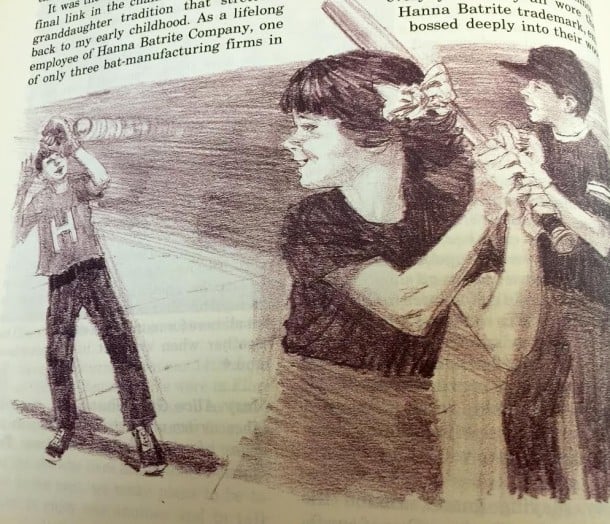