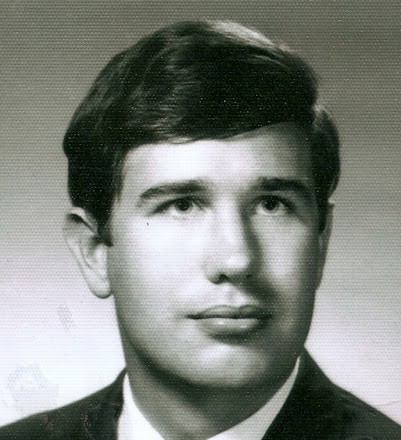 The Inspiration for Uncle Clay in Gone From These Woods

My late uncle, Terry Joe Bailey, was the inspiration for my character, Uncle Clay, in my debut children’s middle grade novel, Gone From These Woods, published by Penguin Random House.

When I was a child, growing up in Athens, Georgia, Uncle Terry was like my older brother. For the first year of my life, I lived with Terry, my maternal grandparents Sim and Myrtle Bailey, and my mom, Faye Coile Bailey, while my dad, Henry Donald Bailey, served in the U.S. Army as a military policeman in Japan during the Korean Conflict. Like Uncle Clay in my book, Terry was an important person in my life from the very beginning. On countless hot summer days, he spent hours playing with me, even though he was five years older. Our favorite game was playing cops and robbers while riding our bikes on the long, winding dirt driveway that led from Lexington Road around to the back of my grandparents’ house.

When he was in his early 20s, a car turned in front of Terry as he rode his bike down Baxter Street hill, near the University of Georgia dorms. Terry suffered a horrific brain injury and was rushed to Emory Hospital in Atlanta where they operated and placed a metal plate over a hole in his skull.

A long recovery followed, during which Terry went back to UGA and received his Master’s degree in counseling. Terry became a college admissions counselor, first in Ailey, Georgia and later in Columbus, Georgia.

Terry had several happy years of work and marriage before receiving a devastating diagnosis of terminal cancer. He died at age 34 and is buried in the Bailey family plot at his beloved Tuckston Church in Athens, Georgia.

Other Inspirations for Gone From These Woods

I also found inspiration for my first published book during morning exercise walks around my rural Winterville, Georgia neighborhood. The beautiful, wooded area with its row of lakes and abundant wildlife, including birds and rabbits, helped me to spin stories in my head as I fast-walked the two to three miles each morning that helped me to lose almost 40 pounds and lower my blood pressure and cholesterol.

One morning, I actually stumbled upon a dead rabbit that looked as if it had died in mid run. One of my neighbors later told me it probably died of a heart attack while being chased by a fox that had taken up residence underneath a tall stack of cut trees and other vegetation piled in an open area in the woods nearby. This fox, or one of its relatives, had actually crossed my path on a recent exercise walk. It was the first time I had seen such a creature outside of a zoo.

Getting back to the rabbit, I spent a few minutes looking at the dead bunny, wondering if it had felt any pain when it died and also wondering why it had to die like that. it wasn’t much of a leap for me to imagine  how hard it would be for someone like me to shoot a rabbit. Later, while writing, I gave my Gone From These Woods narrator, eleven-year-old Daniel Sartain, those same thoughts and feelings when he looked at a dead rabbit in the woods and then later when he tried to shoot a live rabbit.

I found the model for my neighbor character, Frank Hooper, on my morning exercise walks, too. His name was George Langdale and he owned the almost 70 acres of land behind my house, where I exercised walked each morning.

One day, George stopped his pickup truck and waited for me to approach. If you’re exercise walking, you don’t want to stop and let your heart rate slow down, but I stopped.

“Then help yourself.” He motioned toward his property, across the dam between two lakes.

I thanked George and continued my walk, thinking I’d go over there later with a sack and pick a mess of greens.

When my editor suggested adding a neighbor character to Gone From These Woods, I immediately thought of George Langdale.