Another Side of Vince Dooley 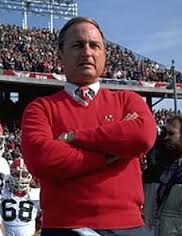 Here in Athens, Georgia, the home of the Bulldogs, most of us feel like we know Vince Dooley, former football coach and present athletic director at the University of Georgia. We know he’s been here 25 years and won a national championship plus numerous other prestigious honors. We know his favorite colors are red and black, his wife’s name is Barbara and he doesn’t like to pass.

The other night at a Winterville Elementary school PTA meeting, I met a different Vince Dooley. This man stood before the audience of parents, children and teachers and spoke to us proudly as the father of four children.

He didn’t just brag on Deanna, Daniel, Denise and Derek either. He told us about their problems and achievements during their formative years in Athens.

As I sat there in the audience between my own two growing children, listening to Dooley talk about his four, I couldn’t help but admire all of the Dooleys — the parents and the children. What great, looming shadows these four kids had to live under. And what tremendous pressures both mother and father had to endure while raising their team of winners.

We tend to think that only children of the poor and disadvantaged must struggle. But, for just a moment, imagine you are the son of Vince Dooley and you have a learning disability. Would you be willing to spend three quarters in Developmental Studies at the University of Georgia? Would you have gone on and graduated with a 3.1 GPA after that? Daniel Dooley did.

What if you wanted to play football and you were the son of Vince Dooley? Would you feel a bit of pressure every time you suited up? Derek must have. But he kept practicing and went on to earn a Scholarship at Virginia.

Don’t misunderstand me. I’m not saying we should feel sorry for the children of the Vince and Barbara Dooleys of the world. What I am saying is this: We all have to struggle in some way to grow up and become “somebody.”

If our parents are well-off and successful, we must work hard to find our own niche in life. If they’re poor, abusive, or simply don’t offer any support, financial or otherwise, we must struggle even harder to succeed. It’s the strugglers, rich or poor, who make it in this world.

Vince Dooley wasn’t guaranteed success when he came to Athens 25 years ago to coach the Bulldogs. He had to struggle at first and work hard all during his career at Georgia. Now, standing before our PTA group as the Honorary Chairman of Membership for the Georgia PTA, he told us that he also had to make sacrifices for his career. “I didn’t have enough time to spend with my children while they were growing up,” he admitted, “But thank goodness Barbara was there.”

Recalling one of his most famous Georgia players, Herschel Walker, Dooley said that Herschel was “different.” He said whenever he came home from school or practice, instead of doing the usual things that children do, he would always go straight to his room and study.

“Herschel had the most tremendous ability to concentrate,” Dooley remembered. “Whenever we had a meeting, he always sat up straight, in the front row, and listened to every word that was said. He took great pride in being a good student in addition to being a good athlete.”

There was a long, admiring line of children and adults waiting to speak with Dooley after his PTA talk. My children braved the crowd and came home with the former coach’s autograph, a treasure they’re now proudly displaying alongside their honor roll ribbons and certificates of achievements.

I brought home an image of Dooley, the father, and his best team ever — his family. It may not be on my bulletin board, but it’s the Dooley picture I’ll always keep.

This column originally appeared in a 1980s edition of the Athens Daily News in Athens, Georgia. I was an editorial page columnist for that publication for six years.